Rueben Mayes: The Inspiring Story of a Canadian Farm Boy Turned NFL Rookie of the Year

Rueben Mayes was born in North Battleford, Saskatchewan, Canada in 1963. Growing up on a rural farm, he developed a love for football at a young age and played high school football at North Battleford Comprehensive High School. Thanks to his high school football coach, Rueben’s skills on the field eventually caught the attention of Washington State University (WSU) where he was recruited to play in the US at the collegiate level. Rueben had an impressive college career and was drafted into the NFL by the New Orleans Saints in 1986. Over his 8-year NFL career, Rueben earned 2 Pro Bowl selections and set several team records. Today, Rueben is still involved in the community and uses his story to inspire others to believe in themselves.

Rueben credits his high school football coach, Don Hodgins, for helping him develop his skills and instilling a love for the game in him. Always pushing him to be his best, Coach Hodgins believed in Rueben’s abilities. As Rueben’s high school football career was nearing its end, Hodgins began contacting numerous NCAA colleges and universities about the prospect of Rueben playing football at the next level. He went above and beyond to show Rueben that he believed in him.

Coach Hodgins finally got Rueben’s film in front of WSU’s head coach, Jim Walden, after seeking out WSU Defensive Coordinator, Bob Padilla, at the Edmonton Eskimoes Pro Camp. According to Jim Walden, “it looked like the film was taken from the back of a pickup truck at a high school football game, but we noticed that every time Rueben touched the ball, he would score a touchdown”. So thanks to Coach Hodgins’ tenacity and belief in Rueben, Jim Walden recruited and offered a full-ride scholarship for him to attend WSU that fall.

Rueben Mayes enjoyed a successful collegiate career at Washington State University. He played running back for the Cougars, was named All-American (1984), and set numerous WSU records. Here is a snapshot of the accolades he earned while at WSU.

As his time at WSU came to a close, Rueben was the 57th overall pick, drafted by the New Orleans Saints in the third round of the 1986 NFL Draft. During his inaugural year in the NFL, he was the only Canadian-born player to be drafted into the NFL, win the NFL Offensive Rookie of the Year (1986), and be named All-Pro. Rueben played for New Orleans Saints for five seasons before sitting out a year to heal from injuries. The Seattle Seahawks re-signed him in 1992 where he played an additional two seasons before finally retiring from football.

Reuben’s time in the NFL was impressive. Throughout his professional football career, he was selected for the Pro Bowl two times (1986, and 1987) and he holds many franchise records. Rueben’s best season came in 1986 when he had 1,353 rushing yards, 8 touchdowns, caught 17 passes, and returned 10 kickoffs for a total of 213 yards or an average of 21.3 yards per touch. He was inducted into the New Orleans Saints Hall of Fame in 2004. Having accomplished so many great things, it’s hard to imagine him going on to accomplish even more!

After Rueben’s NFL career came to a close, he returned to WSU to obtain his Master in Business Administration in 2000. After working as an administrator at Washington State University for eight years, he now serves as Chief Development and External Relations Officer at Pullman Regional Hospital Foundation. He’s dedicated his career to making the community a better place and inspiring others to believe in themselves. His wife, Marie Mayes, is the Director of the Center for Entrepreneurial Studies in the Carson College of Business at WSU. They have raised three children in the town where it all started: Pullman, Washington.

Going back to his roots, Reuben was invited back to North Battleford Comprehensive High School on June 14, 2012. It was then that the football practice field was renamed ‘Rueben Mayes Field’ to honor the most famous alumnus in NBCHS Vikings football history. Rueben attended the dedication ceremony and was asked to share a few words about his experience.

In retrospect, Rueben is grateful to Coach Hodgins for allowing him to play at the collegiate level and fulfill his dream of playing in the NFL. He often says that he would not have had the success he did in his career if it weren’t for Coach Hodgins’s belief in him.

With stories like that of Rueben Mayes, it is easy to see how important it is for every child to have someone believe in them. If it weren’t for Coach Hodgins, who knows where Rueben’s life would have taken him? The important thing to remember is that Coach Hodgins helped Rueben develop the self-confidence he needed to succeed. Using football as a catalyst, he was able to build skills that would take him further than he would have ever imagined.

We encourage you to think back to the person who believed in you and helped you develop the self-confidence you needed to succeed. Where would you be today without them? At Believe in Me, we need people like you to be that person for marginalized kids in our community. Consider getting involved with our mission by sharing your time and talents. Click the links below to get started. 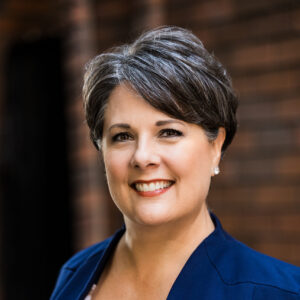 Julie is the last child in a family of seven that was dedicated to serving the community through the church. The daughter of a missionary pastor, she grew up to raise three children, earning her degree in Finance and an MBA from Washington State University. She now serves her community through her role at Believe in Me - Foundation for Kids. Julie describes her job at Believe in Me as the Chief Change Maker. She likes to make sure she has the right people working on the job, equipping them with the right technology and streamlined processes. Put all that business aside and she's leveraging everything she’s got to make a difference in kids' lives every day.
Back to All Posts
Share Article